The traditions that Americans in the U.S. follow are frequently borrowed from or have evolved from other countries' and cultures' practices.

Have you ever wondered why the happy couple invites special friends and family members to participate in their wedding? This American wedding party tradition dates back to ancient Roman times. Several women were asked to dress similar to the bride in order to confuse any evil spirits that may attempt to kidnap the bride. Nowadays, the bridesmaids may dress differently from the bride, but they wear similar dresses to each other for good luck.

The best man and other groomsmen also have roles steeped in tradition. In ancient times, brides weren't exactly willing parties. Instead, they would be abducted by the groom, his best man, and other close friends. These men are now representing both consenting parties by being groomsmen.

The bridal shower wasn't originally intended to be a party for the bride to receive gifts. Rather, they were intended to help raise dowry money for brides and their families who couldn't afford one in Europe (1500s). Today's showers started emerging around the 1800s in the U.S. 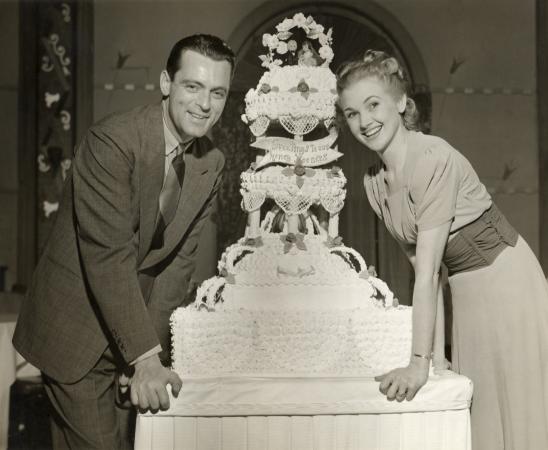 The cake isn't just to provide a sweet end to a wedding feast. In ancient times, there was a different meaning. A small cake was broken over the brides head during the ceremony to symbolize fertility. The guests would pick up the bits of cake that fell to the floor and keep them for luck.

Cake toppers came to be when Queen Victoria wed Prince Albert in 1850 and she had small figurines of herself and the Prince created for the top. By the 1950s, this was commonly seen in U.S. weddings.

Finally, the groom's cake is a uniquely American custom that started in the South.

Carrying the Bride Over the Threshold

A favorite tradition of television newlyweds is to carry the bride over the threshold before entering their home to start a new life together. The reason? It's bad luck for a bride to trip upon entering the couple's home for the first time and if she is carried, she will not bring "evil spirits" in with her. Her husband carries her so this won't happen.

Some say the honeymoon stemmed from the bridal abductions. The kidnapped bride and her groom would run off to a hidden location so no one would find them. They were usually gone for about a month. Others highlight that the reason for the honeymoon was to travel to visit friends and relatives who couldn't attend the wedding itself. Either way, the honeymoon is now firmly embedded in American wedding culture.

Other Wedding Customs in the U.S.

If you attend a traditional wedding in America, you can expect to observe a few customs. Again, while they may not have started in the U.S., they are often practiced across various religions and cultures within the country. Couples may observe just a few or all of these customs.

While many of the traditional wedding events and customs are still practiced, things have evolved over the years. A few areas that are changing in modern U.S. weddings include:

American wedding traditions are a fun part of the festivities. While customs will always be evolving, add a few of these practices into your American wedding for a traditional ceremony and reception.