Wedding party history plays a big part in the roles of the bride's attendants and groomsmen in modern day weddings. The traditional bridal party is one that has more legend than fact when it comes to its origins as they evolved over time around the world.

The history of the men who stand with the groom involves possible kidnapping and the potential for sword fighting.

Stories Behind the Groom's Men

Legends commonly passed down say that the groomsmen and best man actually started out as the people who were entrusted by the groom to help ensure the bride's safety to the wedding, during the ceremony, and later the groom's home; sometimes they are called the bride's knights. Sometimes lore says the groomsmen/best man would kidnap the bride from her home and possible disapproving parents. The Everything Wedding Book (p. 21) says that the best man would help the groom "fight" for the bride if there are other potential suitors. Once the bride has been brought to the ceremony, some lore says the groomsmen and best man would then guard the bride, possibly with swords, so nothing interrupts the ceremony until it is complete. This is why the best man and groom stand to the right of the bride; they will be able to reach their swords easily.

The Old Farmer's Almanac (OFA) writes that historically, only a father, brother, or best friend would serve as best man. While the exact history behind groomsmen and the best man may not be pinned down with a single dated history, a few things in the history of groomsmen are verifiable:

Bridesmaids and Maid of Honor

The bridesmaids are one of the oldest standing traditions in the wedding.

In fact, Reader's Digest points out that as far back as Biblical times, women had other females stand with them, noting the wedding of Jacob to Leah and Rachel, where there were "literally the brides' maids" in attendance.

Other notable points in the history of these all-important women include:

The Bride's Pocket Guide to Wedding Customs and Superstitions writes that the ring bearer tradition may have started in ancient Egypt. Oxford Dictionaries notes that the titles of "ring bearer" and "flower girl" started in the United States, likely sometime around the 1930s. 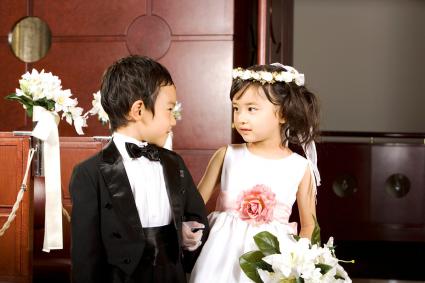 Bride's Guide also says that flower girls' roles may have begun in ancient Rome and Greece, as she dropped herbs and flowers for fertility for the bride. OFA says that the flower girl's petals were to help protect the bride's virginity. The flower girl's job of throwing petals served several purposes that aided the bride.

The background and history of the bridal party is one that often can't be pinpointed to a specific date. With wedding customs around the world evolving at the same time, many stories and folklore cannot be dated definitively. Regardless of when or how they started, though, brides and grooms today still uphold the traditional wedding party to honor their close friends and find support for their nuptials.