Traditional wedding announcements use pre-wedding wording to share that a wedding is upcoming and the wedding is introduced by the parents of the bride, groom, or both.

Modern couples who aren't excited about sharing their education and achievements with the world can appease traditional parents and stay true to who they are with creative wedding announcements. You can even include fun elements like engagement announcement poems and verses.

It's happily ever after for Mr. (Groom's full name) and Mrs. (Bride's full married name)! Once upon a time, on (Wedding date), they said "I do." in front of the people who love them most. (Bride's name) looked like a fairytale princess wearing a (Dress type) gown. (Groom's name) showed off his inner Prince Charming wearing a (Tux type) tuxedo/suit. (Wedding venue name) served as their castle where they sealed their love and their fate with a magical kiss.

What Should the Announcement Say?

In some ways, the wording of a wedding announcement in the newspaper hasn't changed much in several generations. newspapers you hope to announce in.

Whether you are announcing the engagement or the wedding itself, the standard procedure is to give a lot of information about the families and accomplishments of the bride and groom. Beyond that, it depends upon the limitations of the paper and your budget, as most papers charge by the word. Couples should also be aware that some newspapers have a standard format for wedding announcements and extra information may not be permitted. 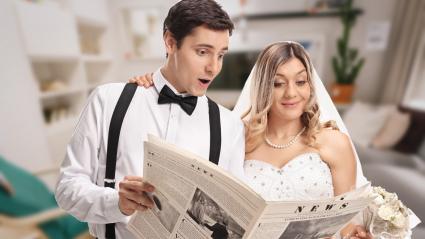 Etiquette for newspaper wedding announcements varies from family to family and region to region, but many people follow a similar set of guidelines.

When to Send It In

A big city newspaper is going to have a different procedure from a smaller, more local publication. They all typically have websites that will advise as to the best time to send something in for publication consideration, including deadlines for announcements that include photographs. If you want to announce the wedding before the date, you'll have to be very proactive. Many newspapers have limited space and a lot of competition, so preparing the announcement well in advance for submission consideration by submitting at least three weeks before publication is ideal.

Should You Include a Photograph?

While it's expected that friends and family members would purchase their own copy of the newspaper, it's also nice for the bride, groom, and their parents to purchase a few extra copies. You'll want to clip announcements for your own keepsakes, but it's also nice to clip them for out-of-town guests who might want a copy.

Wedding Announcement in the Newspaper History

Announcing an engagement or marriage wasn't always about the joy of the event. It was quite serious, related to the old tradition of "reading of the banns." This was important, because it gave anyone in the community ample time to step forward and say that the ceremony should not take place. Until recently, marriage was regarded more as a business arrangement than anything else, and it was a way even middle-class families could better themselves. If a son or daughter was marrying into a good family with money, saying as much to the world at large could change both families' fortunes for years to come. 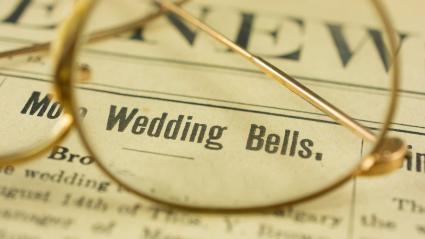 Newspaper Traditions in a Digital Age