Throwing a shower for your friend's wedding is a fun task that celebrates the bridal couple. Start planning early so you can get everything in order and throw a festive fete that everyone will gush over for months to come.

Following traditional shower etiquette, it's the maid-of-honor who hosts the shower. However, bridesmaids often lend a hand when it comes to shower planning as well. Really, just about anyone can host a shower, from godmothers to friends to coworkers. If you want to host a shower and aren't in the bridal party, check with them and the mother-of-the-bride before you start planning in order to avoid duplicating guest lists and themes.

Modern couples are often thrown coed showers. In this instance, it might be a family friend or distant (non-immediate) family member who hosts as couples. The maid-of-honor and best man might also get together to host a coed shower.

Generally, the mother-of-the-bride and sisters (who are not serving as maid-of-honors) do not host the shower. That being said, with the expense and expanse of guests, there is no longer a hard-and-fast rule about who can't host. Consider your social circle and go with what feels best.

The date of the shower should be set early. This way, you can be sure you get the location and caterer (if hiring) and so guests have proper notice. Once you've decided to throw the wedding shower, speak with the bride about the best possible dates in her calendar. Check with both the mother of the bride and mother of the groom as well as bridesmaids.

You'll want to set a date that's a minimum of six to eight weeks away to allow time for proper planning.

The guest list for the bridal shower should include bridal party members, immediate family members, and close friends and relatives. If the shower is at work or hosted by a coworker, then include office mates on the guest list too. Get a list of invitees from the bride, or, if she is not involved in the shower planning, the mother(s) of the bride/groom and the bridal party.

Before finalizing the guest list, take a second look at the list. If someone important to the bride isn't on it, add them. Conversely, if there's someone who clearly wouldn't be able to attend (due to distance, expense, or other reasons), check to see if they should still be included.

Don't invite people who aren't invited to the wedding unless they specifically mention they'd like to be included in the festivities. For example, a coworker may express interest in attending a shower even if she is not attending the wedding. In this instance, it would be fine to include her. Use your best judgement.

Once you have a general idea about the number of people invited, you'll be able to book the shower location. In many instances, the hostess opens her own home to guests for a casual celebration. Of course, you aren't limited to a party at home.

If space is limited, you want to host a more extravagant affair, or you simply don't want to host the shower at home, you have plenty of other options.

As soon as the date is set, you'll want to book the shower location. Most locations will have other interested parties for various reasons, so start calling as soon as you can and put down a deposit. 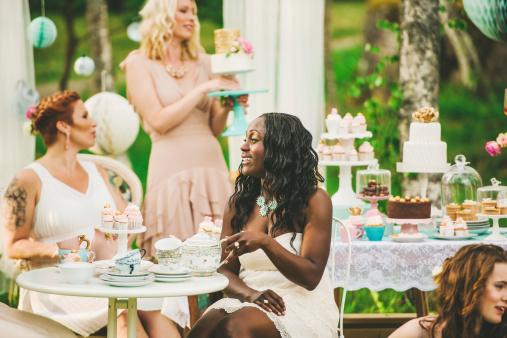 You'll want to select a shower theme, graphic, or colors to plan the shower around. The theme doesn't need to be elaborate, but there should be some sort of cohesiveness to the event overall. For example, you might want to plan around a particular graphic (such as a wedding dress, doves, or intertwined rings) or around the wedding colors. Alternatively, you could have an extravagant tea party theme or a gift-giving theme, such as "time to stock the kitchen." If the shower is being held near a holiday, you could also make that the theme, like a Valentine's Day or Halloween bridal shower.

The theme should be selected prior to purchasing invitations and supplies. This way, you can be sure everything will work together to create a memorable event. It also makes future decisions easy because you've already narrowed down the choices.

Invitations should match the tone and theme of the event. Look for invitations in colors that will match the rest of your decorations or the bridal party colors.

Hosts often wonder whether it's appropriate to include wedding registry information in the shower invitations. Traditional gift etiquette says to skip it, but it's becoming more common. Ask the bride and her mother what the norm is for their social circle.

The food is an important part of any party, including a bridal shower. Caterers should be booked as soon as possible and if you're DIYing the food, you'll want to create a menu and write your shopping list at least a week prior to the event. 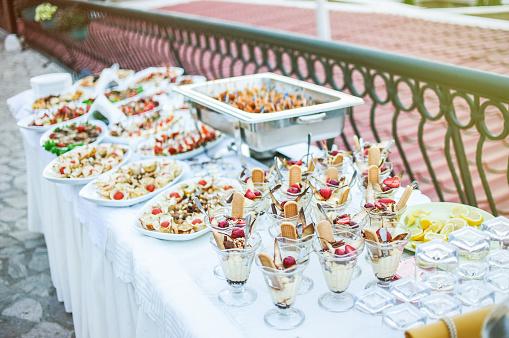 Hosting a catered shower is likely the more expensive, but more hassle-free, option. If the shower will be held at a restaurant or hotel, it's likely you'll be using the restaurant catering services on-site. Check with them to find out options and when you need the final numbers.

You can also contact your own caterers to deliver dishes to your home or alternative location. You can usually select from having them do everything from make the food to serve the food to cleaning up to simply dropping off dishes that you serve yourself. The second option is often more cost effective while still allowing you to avoid time in the kitchen.

Making the food yourself allows you to serve family favorites, show off your gourmet skills, and control the budget. This is often better for a more casual get-together or an event with a buffet featuring finger foods. It's important you calculate how much food to make correctly, though, as you don't want to make too little.

Consider the time of day as well as the theme. For example:

Serve beverages such as classic party punch and be sure you have dessert options. You can't go wrong with making or purchasing a bridal shower cake. If you plan to purchase a cake from a bakery, book this as soon as possible as many small bakeries fill dates quickly. 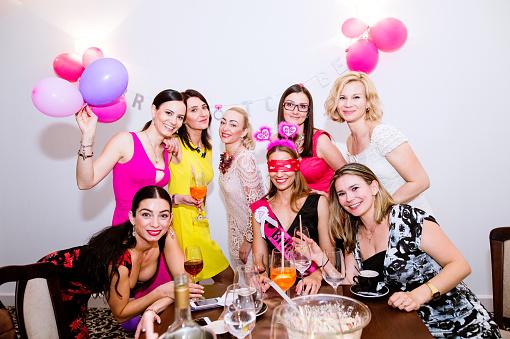 Most showers have a least one game or activity for the bride and her guests. This can be as simple as a game to match famous couples or be more elaborate, unique shower games like a scavenger hunt or fashion show. If the wedding shower is coed, plan bride and groom shower games that get both genders involved, like karaoke and cake feeding contests! Don't forget to pick up small prizes for the game winners, like nail polish, fast food coupons, or other small but useful trinkets.

Before making your final game or activity selection, you should consider the bride's (and groom's) feelings. If she is easily embarrassed, it's best to stick with simple, traditional worksheet games instead of making her front and center.

If you have bridesmaids or other friends/family who have offered to help plan the shower, you can request they help with the game portion. Just be sure you let them know in advance with a couple weeks' notice so they have time to come up with something fun.

Decorations and favors should match the overall shower style.

The amount of shower decorations needed will depend on both your location and theme. Themed decor usually means putting in a little more effort with additional ceiling and wall decorations to really pull it off, whereas a shower held at a fancy restaurant may not need much styling to make it look festive. At minimum, you'll need to pick up:

The shower favor you give out should be a token that reflects the theme and your gratitude for everyone attending. Personalized favors should be purchased at least a month in advance, while simple favors with tags can be purchased or made the week prior to the shower. In fact, as long as the favor isn't edible, you can purchase or make them as far in advance as desired.

A few things will need to be done the week before the shower. Follow this checklist to be sure you have everything covered:

Plan to arrive at the location at least an hour prior to the shower's start. Set up a sign with balloons and an arrow at the edge of the road to indicate where guests should turn for the shower at least 15 minutes before the shower begins.

Throwing a Festive Shower for the Bride

Throwing a wedding shower is a gracious gesture. With a little planning, you're sure to pull off a memorable and festive event for the bride-to-be!