With the rising popularity of Renaissance fairs and a greater freedom to personalize weddings, Renaissance weddings are making a comeback. Considering the beauty, sophistication, and well-rounded advancement of the Renaissance it is only natural that it has become a source of inspiration for weddings.

Wedding Stages During the Renaissance

During the Renaissance, weddings, specially for the middle and upper classes, where more about family mergers than romantic love. However, as the period gave way to enlightened values and a higher sense of aesthetics, the actual process and celebrations began to evolve into what we consider a wedding today. According to author Donna Russo Morin, an Italian renaissance wedding would be comprised of the following stages:

Impalmamento is the joining of the hands or betrothal, where the couple would be introduced to each other by their families and matchmaker.

The sponsalia was the negotiation between the family leaders (usually fathers) regarding who would get what in terms of dowry and economic advantages.

The matrimonium was the actual ceremony by which the marriage was formally carried out and registered before the local authorities.

The nozze was the procession of the bride to the groom's home before the entire community and consummation of the marriage.

According to All About Renaissance Faires, the giving of hand and economical agreements of the marriage could take place years before the couple actually got married. When the bride was of childbearing age the ceremony and festivities would take place. For peasant folk, Renaissance weddings may have been a bit more like Celtic weddings, but the for the better part following the gist of what was the general custom.

Renaissance weddings ceremonies were civil until the church (then, the governing authority in much of Europe) changed the ruling on marriage, at which point they became Christian/Catholic, depending where you lived. Renaissance Jewish and Muslim wedding ceremonies were celebrated according to their respective traditions and in many occasions they became a mix of whatever was civilly mandatory and religiously appropriate for each family. Some sources for readings from this period include:

The actual marriage ceremony would have been carried out in two steps.

The declaration of intent and announcement of the marriage to the town (the bans) was the first step of the ceremony. This could be done before the local authorities or before religious authorities (which many times were the same) privately, or at the entrance of the church or town hall.

Depending on customs of the couple's families, the exchange of gifts or rings would have taken place prior to the ceremony, sometimes as far back as the betrothal stages, or during the declaration of vows.

While the actual marriage ceremony may have differed from community to community, certain rituals and celebrations were commonly shared and enjoyed throughout the Renaissance, including:

Joining of Hands and/or Handfasting

One of the most common rituals was handfasting. It hails from even before this era, and all social classes celebrated a similar tradition throughout all of Europe. All About Renaissance Faires clarifies that this tradition was celebrated before the actual wedding ceremony as a union ceremony in its own right. However, you can include this tradition in your ceremony in the following ways:

However this ritual is performed, the meaning is essentially the same, the couple is agreeing to join their lives, either as a betrothal, as a temporary contract, or as a permanent marriage union. You decide.

Bride Blessing Under a Pall

A beautiful tradition that came to be when the Catholic church made it obligatory to get married by a priest was the blessing of the bride. The bride would covered by a silk cloth held by four maidens while she was blessed by the marriage ceremony officiant. The silk cloth was called the "Pall" and by covering the bride she was covered as well by the blessing received. This blessing could be reinterpreted in modern times, by having four cherished friends hold the Pall over the couple with the intention of blessing their union, in a way reminiscent of the Filipino veil tradition.

You may be surprised to discover that one of the most common wedding traditions, the tradition of throwing rice, dates back to Renaissance times. This is an essential part of the wedding, and symbolizes fertility and luck for the couple.

If ever the bride took center stage during the Renaissance, it was during the procession to her husbands home. After the ceremony she rode a white horse and all the town would cheer her on as she and her family and friends (on foot) made their way to her new home were sumptuous feast would ensue.

Flowers were key elements of beauty. Women wore flower wreaths (or flower crowns) made of wildflowers and herbs, which symbolize luck and fertility. Additionally, hand tied bouquets with abundant ivy (which symbolizes fidelity) were favored. For a touch of Renaissance authenticity consider the meanings given to flowers during the Renaissance as conveyed by Shakespeare:

For your Renaissance wedding flowers, consider choosing wild or garden flowers loosely arranged and/or hand tied with abundant ribbons. You may want to check the weddings scenes (there's two!) of the movie rendition of Shakespeare's Much A Do About Nothing. 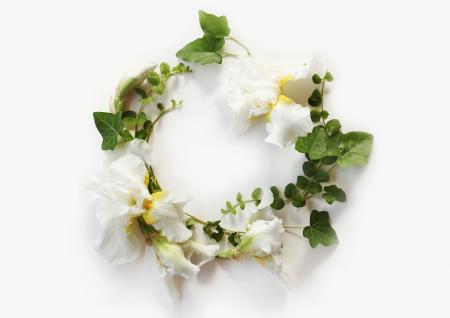 During the Renaissance, colorful rich fabrics were a luxury, so for weddings these were preferred. Jewel tones and bright colors were favored for Renaissance wedding dresses, although it is true that one of the most popular colors was blue. Blue was considered a symbol of purity, and if a bride didn't wear a blue dress, she still carried something that was blue, thus the saying, "Something old, something blue" came to be by the end of the Renaissance. 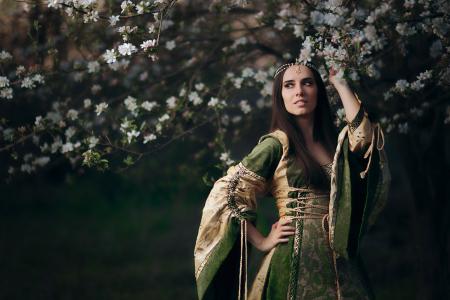 The throwing of the garter dates back to the Renaissance era. It was said that if a male guest at the wedding gave the bride's garter to his love, he would receive faithfulness. So the men would pester the bride until they got the prized garter, sometimes following her all the way to the nuptial room. In an attempt to safeguard their integrity, brides started throwing their garters at them. Eventually this evolved to a more modest throwing of the bouquet by the bride, and throwing of the garter by the groom.

A wedding was a community affair and as such it was widely celebrated. At least one big feast was prepared and held after the marriage ceremony and either before, or simultaneously as the consummation of the marriage took place in the nuptial quarters. The wealthier the families the more extravagant the feasts and the longer they lasted, sometimes lasting for days and days. However, notwithstanding the means or class, every wedding held at least one day of feasting and celebration and everybody knew about it!

The tiered or layered wedding cake also dates back to Renaissance times. The guests would bring small cakes to stack on top of each other. If the couple could kiss over the top of the stack without knocking them down, they would have good luck. For a modern wedding, you could also use a themed cake topper.

For couples who want their wedding steeped in Renaissance tradition, music and celebrating will play a big role in the success of the wedding. If possible, search out musical minstrels to play at your wedding and capture the very essence of the Renaissance period. Minstrels can lead the processional, play during the ceremony, and lead the recessional, too. Playing a selection of Renaissance music at the reception would be an excellent opportunity to practice dancing the Renaissance way.

If you want a true Renaissance wedding ceremony, you'll need to let your guests know quite a bit in advance, so that they can search for the perfect Renaissance clothing or costume. There are many shops that specialize in men's fashions from the Renaissance as well as women's attire. You can even find recreations of Renaissance footwear. You can also consult with your local theatrical departments and your closest Renaissance Faire. If you're crafty or know how to sew, you could even make your own costume with a pattern. 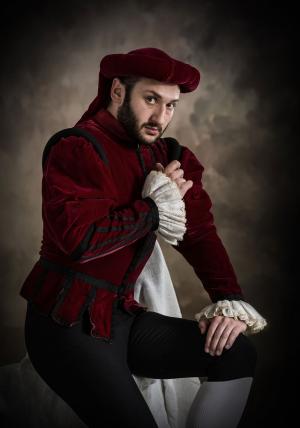 The Renaissance era was a time of feasting and celebration. Popular foods include the following:

The Renaissance was an age of pursuit of beauty, science, and humanity. It left a deep mark in history with fabulous artistic creations and advancements in all areas of everyday life. Drawing wedding inspiration from an era that literally means rebirth couldn't be more appropriate. After all, a new married life is about to begin!