Native American wedding ceremony may include similar elements to those of contemporary wedding ceremonies, albeit with a very distinct interpretation.

Many couples wear ceremonial clothing for special occasions like weddings, often referred to as regalia. Native American brides often wear red or other bright colors instead of white to their ceremony, and their dress may be passed down through generations, according to Native Net. Depending on the tribe, location, and type of wedding, some women and men may wear modern wedding attire. Ceremonial clothing can differ from tribe to tribe. For example:

The American Indian Heritage Foundation (AIHF) reports that historically, Native Americans did not create jewelry like wedding rings. However, contemporary tradition includes them in metals like sterling silver using turquoise stones for ladies' rings or opal for men's rings. 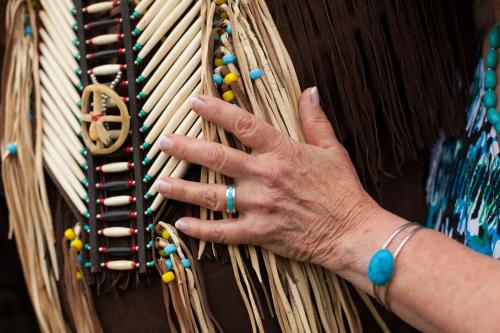 Flutes, vocals, and drums were used during special ceremonies like weddings. Some tribes have special ritual dances that may be performed at social occasions like weddings. These dances may include the crow hop, shake dance, round dance, or ribbon dance notes of the Nanticoke Indian Tribe.

Each tribe has different events and sayings that occur during the exchange of vows. One of the processes of exchanging vows is referred to as the Rite of the Seven Steps. The creation of this Rite can be attributed to numerous tribes throughout the nation, reports the Manataka American Indian Council. Although no "bridal party" as it is known today is involved in traditional Native American weddings, this exchange involves guests.

In the Rite, the couple takes seven steps clockwise around a sacred fire. The groom takes the first step, stops and recites a vow. The bride follows suit. This ritual continues until both the bride and groom complete seven steps. In some instances, the bride and groom exchange small gifts symbolizing their love and life together, such as ears of corn, feathers or stones, at each step. Corn represents fertility, feathers loyalty, and stones strength. As the bride and groom take their symbolic walk, guests join hands and form a circle around them and the fire.

Traditional Native American weddings can include one or more of several smaller ceremonies within the larger one:

The Museum of Man reports that at Navajo weddings, brides may pour water on the groom's hands to represent their new union. Native Net notes that both the bride and groom wash their hands in order to remove old memories and past wrongdoings.

In this ceremony, according to the Manataka American Indian Council, the bride and groom exchange baskets filled with gifts. The baskets symbolize the dowries traditionally required to be exchanged by the bride and groom's families. Gifts may consist of bread, corn, and meat.

Tribes in the Southeast and Southwest may perform a wedding vase unity ceremony, in which they fill a vase with two holes on either side with water. The bride and groom drink from the water pouring from the vase as a toast to their union. A couple that can drink simultaneously without spilling a drop is anticipated to have good understanding with them throughout their marriage. First Nation Ministry notes that the Cherokee is one specific tribe who uses the vase ceremony. 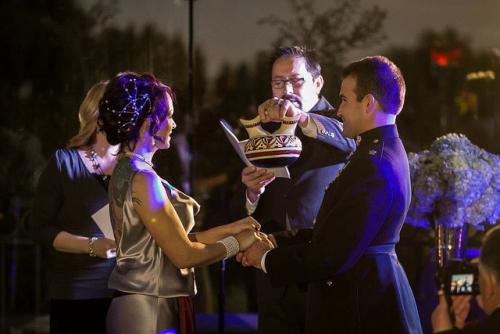 Some tribes traditionally participated in wedding blanket ceremonies. In one example of this ceremony, the bride and groom are first wrapped individually in blue blankets. While wrapped in the blankets, the officiant blesses the couple's union. The blankets are then removed and the couple wrapped in a single white blanket. The blue blankets represent the elements of the couple's individual past lives and the white blanket the couple's dedication to filling their new lives with peace and happiness. The blanket ceremony is used in Cherokee wedding ceremonies, according to First Nation Ministry.

Because metal was not available in historic ceremonies, rings were not traditionally exchanged in Native American weddings. However, an exchange of rings has become popular in modern times. This ceremony is simple, with the bride and groom exchanging rings to symbolize eternal love that has no beginning and no end. There are no specific vows or words that must be said during the exchange of rings, and it can occur at any time during the ceremony.

The Manataka American Indian Council states that, in this ceremony, a fire circle is created using stones and seven types of wood. There is one large, unlit stack of firewood built in the center of the circle and two small fires built that sit to the north and south of the circle. These small fires represent the bride and groom's individual lives. After the two small fires are lit, prayers are offered by the bride and groom and they then push their individual fires into the center stack of wood, igniting one large fire.

While planning a wedding in a sacred location may be extra special, it is important to pay attention to two common denominator: nature and an intent of sacredness. 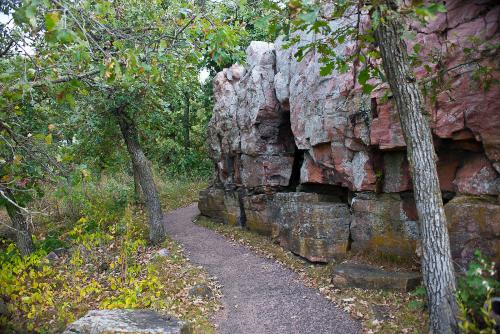 The Greatest Temple of All Is Nature

Native Americans all over have appointed special places in nature as sacred for a variety of reasons, including the natural healing properties of the place, the beauty of area, and even because there was a need for a sacred space at a given time. Some ideal venues include:

When looking at a special place to celebrate your marriage ceremony, consider choosing a space of natural beauty that gives you and you partner a sense of peace, well being, and unity.

Choosing a Time and Season

The Native American celebrations calendar is full of meaninful ceremonies celebrating rites of passage, commemoration of ancestral rites, and honoring different elements of nature and life. While these events are of great importance to individual tribes, they are completely independent from wedding celebrations. According to the Manataka American Indian Council, marriage celebrations were held when it was convenient for both families. It is understood that Spring and Autumn, when there is an abundance of food and natural beauty was particularly propitious, but weddings were not limited to this or any other season.

Each tribe and each clan within the tribe will have their own customs; some very similar, some different. However, the common factor is the importance of sharing this special moment with the community. When choosing a time to hold your wedding ceremony, consider the elements you will include in the ceremony and the capacity of friends and family to join you. For instance, if you are having a fire ceremony, you may want to hold it near sundown.

The variety of ceremonial options that can occur during a Native American wedding means that there is something suitable for every couple. When choosing what elements to include in your wedding, select those that have a meaning you appreciate.