Women who have male friends may want to ask one to be their bridesmaid. Though tradition usually splits men to the groom's side and women to the bride's side, in today's modern society there is no reason a woman cannot have a male attendant.

Groomsmen and bridesmaids are typically the people the couple feels closest to amongst family and friends. If a close pal is of the other gender, a bride may wonder what to do when it comes to choosing bridesmaids.

Considerations Before You Ask Him

Before asking a man to stand up with you, you may want to do two things. One is to double check with your husband-to-be that it is okay with him to break with tradition. Secondly, if you are part of a conservative religious group, you should ask if there are any restrictions regarding having a man stand up with the women. If there is a problem, you can always ask your male friend to do a reading or be an usher, explaining the religious restrictions that prevented you from bestowing the honor.

Title for Men Who Are Bridesmaids

Because bridal party roles have traditionally been split by gender, it is necessary to find a proper title for your male attendant. Couples, especially those who have both males and females on both the groom and bride sides, often choose to use the labels "groom's attendants" and "bride's attendants" when referring to the wedding party. Other acceptable titles include:

Men who fill the role of a bridesman usually do not want to wear a bridesmaid dress.

Instead, have him wear the same style of tuxedo rental as the other male bridal party members. Signify his place by choosing a different color of vest, shirt, or tie than the other groomsmen, or have his colors match those of the bridal party dresses. 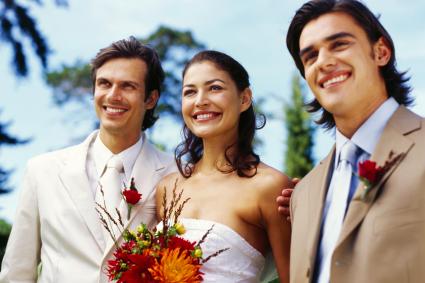 A male bride's attendant will not carry a wedding flower bouquet, although if he wants to, he could. Instead, have a different boutonniere created, mimicking the bridesmaids flowers; something a little different than the groomsmen. Use a pocket square in a different color than the other men for another subtle difference between the attendants.

A man who serves as a bridesmaid can participate in many of the same activities as the rest of the female bridal party members.

Planning or attending a wedding engagement party is something that a male bridesmaid can do to show his support for the couple. It is certainly not necessary for him to plan the party, but if he is invited, he should consider attending as part of his attendant duties.

A bridesman can and should assist the bride in wedding-related errands, such as meeting with vendors, addressing invitations or listening to her vent about wedding stress. If he has some fashion sense, he may give an opinion on bridal gown styles or bridesmaid dress styles, though he might not attend the fittings.

Men supporting the bride can be invited to an all-female bridal shower, but they may feel uncomfortable attending. Instead of hosting a traditional bachelorette or bridal shower, consider throwing a wedding shower that is co-ed, inviting men and women. This way, your male bridesmaid can participate in the shower planning process, like coming up with bride and groom shower games. 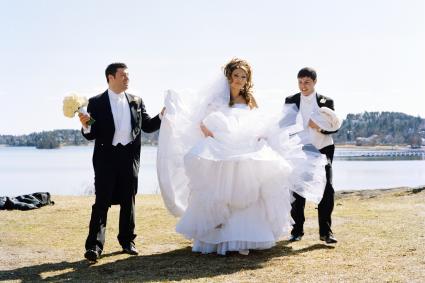 How to Handle the Wedding Processional

Traditional bridal party gender roles don't need to be a worry when men and women are close friends. The male bridesmaid is not taboo; in fact, a good male friend or relative will be honored to stand with the bride on her wedding day.