Ancient Egyptian scrolls from more than 3,000 years ago show images of a man giving a wedding ring to his wife. Early rings were made of twigs, hemp, or plant stems. The plant rings quickly decayed or were broken and had to be frequently replaced. The circles represented undying love, much as they do today. Apparently, they did not represent fidelity, though, as many of the Ancient Egyptians were polygamous.

These ancient rings were not placed around the finger, but around the extremities. Since mortality rates were high and life expectancies were low, people came to the conclusion that a person's spirit could just flow out of the body, ending his life. They often tried interesting and superstitious ideas to keep the spirit intact. For example, an ancient husband would wrap twigs and grass around his new wife's ankles and wrists, believing this would prolong her life.

Ancient Romans placed an iron wedding band as a marker of the contract of marriage between the husband and wife as well as their families. They showed that the woman was owned by her husband instead of her father. Women with wealthier husbands might also receive a gold band along with the iron band. When the wife received two bands, she wore the iron band at home and the gold ring in public. Iron represented strength and permanence while gold symbolized wealth. This was the origin of the metal wedding band, part of a tradition that persists today. Although the Ancient Romans placed a ring on the fourth finger of their wives' hands, the practice had little to do with love and devotion. Rather, wives were a possession to the Romans, and the ring was a sign of ownership. Ancient Roman women had no voice in this decision; there was no proposal. Once the women were captured and "ringed," they were married.

In ancient times, the Egyptians and the Romans shared the belief that a vein from the fourth finger contained the vein of love (vena amoris), which lead directly to the heart. As such, it seemed a logical place for the placement of the wedding band. The practice was passed down and the fourth finger is now universally known as the ring finger. Science has since disproved that theory, but it is still romantic to think that wedding rings are on a direct path to the heart. 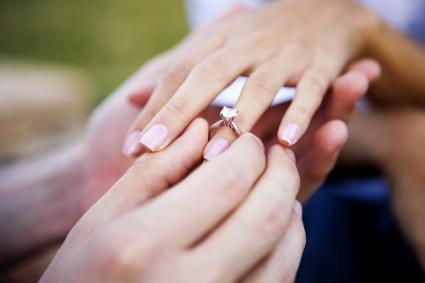 In 16th Century Europe, the betrothed each wore one loop of an entire ring (called a gimmel ring or gimmal ring). When they married, they joined the two halves of the ring and as the bride's wedding band. 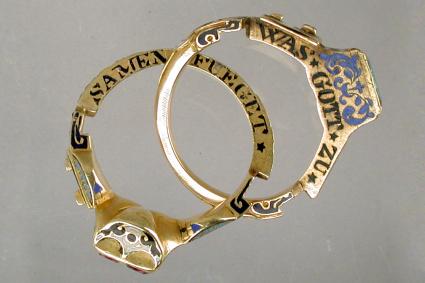 According to one legend, men of the Far and Middle East had a unique way of ensuring that their brides remained faithful. They created "puzzle rings," rings that were collapsible. If a wife tried to remove her ring, the ring would fall apart. The ring could be put back together, but only if one knew the correct arrangement. If the husband had to travel for business or during wartime, the puzzle rings were used to keep the wife true. Other historians suggest puzzle rings were simply an offshoot of the gimmel ring. Puzzle rings remain popular today.

The Renaissance brought about the beginning of the inscribed wedding band. Poesy rings (also spelled posie or posy) were bands inscribed with a poem or love saying and worn as a symbol of marriage. 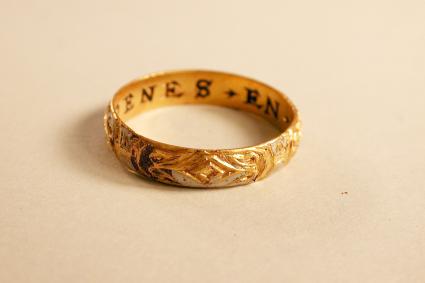 During the 17th century, fede and claddagh rings became a popular type of wedding ring in Ireland. Fede rings are metal bands with a depiction of two hands clasped. Claddagh rings are a type of fede ring featuring clasped hands, a heart, and a crown representing love, friendship, and loyalty. Both remain a popular type of wedding ring today as well as a symbol of Celtic heritage. 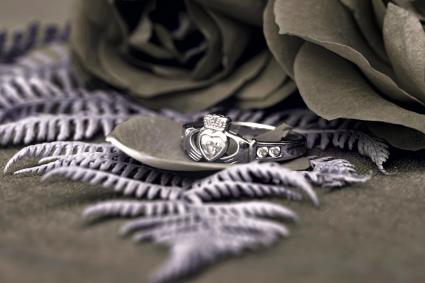 In the early days of American colonization, the Puritan way of thinking said that any form of adornment was wasteful and immoral. Of course, this meant there were no rings. Instead, men gave their brides thimbles as tokens of undying love and devotion. The resourceful brides often removed part of the thimble and created makeshift rings. 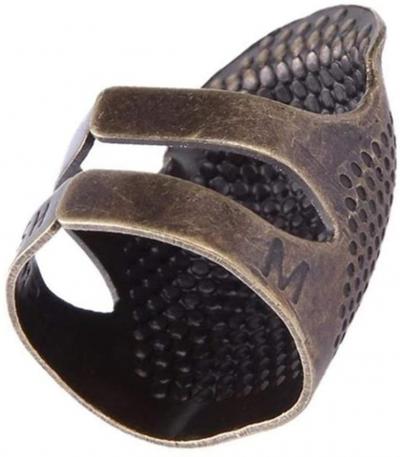 Modernization of the Wedding Ring

As time went by and the rules became looser, the move towards modern rings began. Materials for the rings have varied through the years, depending on personal wealth and the nation's economy. Wedding rings of the past have been made of leather, stone, aluminum, and metal. Today, wedding rings are almost always made of gold, silver, or platinum. Some people choose alternative rings, such as wood, gemstones, titanium, or tattoos. 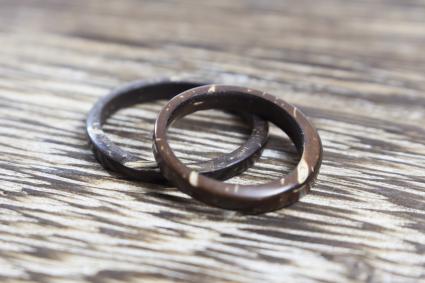 Wedding bands for men are a fairly recent innovation. Throughout history, men have been dominant and either owned wives or lead harems. There was no need for men to be burdened by symbols of marriage and commitment. Even after modern thinking outlawed all forms of slavery and polygamy, the fingers of men were still unadorned. All of that changed during World War II. During the war it became fashionable for men to wear bands to remind them of the loving wives waiting back home. Use of wedding rings by men increased again during the Korean War. Today, many men wear wedding bands, regardless of military status.

Today's wedding bands can vary from a very simple circle to a complex, jewel-adorned band. Partners decide whether they will wear a wedding ring or not, and it isn't at all uncommon for couples to no longer wear wedding rings at all. Bands are made from multiple materials - anything ranging from Hawaiian koa wood all the way up to precious metals with multiple gemstones and wedding sets designed to seat the wedding band decoratively around the engagement ring stone. Some women wear their rings with their engagement ring as well, while some simply wear either the engagement ring or the wedding band. 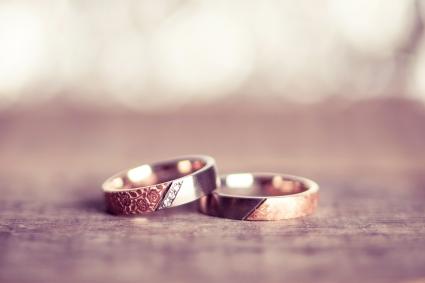 Meaning of the Wedding Band Shape

The wedding band's shape represents an unbroken promise of love and commitment. The circle has no beginning and no end; therefore, the marriage has no end. It is believed that many past cultures shared the same beliefs about the circles. There is, however, another theory behind the ring's shape. Many religions consider marriage as "half of the religion." Some historians say that the wedding ring represents two halves coming together to form a united whole. By completing the circle, primitive man also completed his religion.

While some religious and cultural traditions still require wedding bands, in the modern day Western world, anything goes. Whether it's a tattoo, a family heirloom, an adorned and bejeweled wedding ring, or even a bare finger, it's up to couples to decide what history and traditions they wish to follow with their wedding bands.

Comments
© 2006-2021 LoveToKnow, Corp., except where otherwise noted. All Rights Reserved.
History of the Wedding Ring