It may seem as if brides have been getting married in white forever, but this is not the case. The trend of wearing an all white wedding dress dates back to royalty of Victorian times. Before that, brides wore their best dress. The color and materials of the dress varied depending on a woman's social status.

Even though colors and styles have changed throughout the years, brides have always dressed in their best for the occasion. Royalty and those with a high social standing always dressed at the height of fashion, sparing no expense. Those who had limited means still treated a wedding as a special occasion and dressed as formally as their budgets allowed.

In ancient times, many weddings were economic unions rather than the joining of two people in love. However, ancient brides may still have chosen to symbolize their happiness by wearing brightly colored wedding garments. In ancient Roman times, the wedding kiss was considered legally binding and represented acceptance of the contract of marriage by the bride and groom. While there are limitations on what is known about all ancient wedding dress traditions, the garments and colors varied by culture. For example: 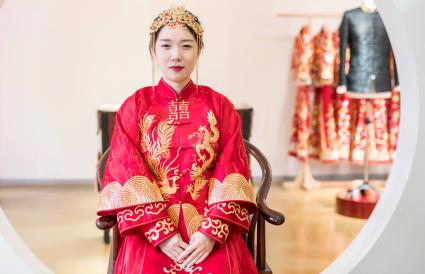 During Medieval times (5th to 15th centuries), the wedding was still more than just a union between two people. It often represented a union between two families, two businesses and even two countries. Weddings were often arranged and more a matter of politics than love. A bride had to dress in a manner which cast her family in the most favorable light, since she wasn't only representing herself.

During the Renaissance (approximately 14th through 17th centuries; coincides with the England's Elizabethan era, 1558-1603), fashion was generally established by the aristocracy. Women typically wore the best garments possible for their situation, and may have included several layers under a principal gown. Weddings could be very elaborate, and the gowns would have reflected that aspect. Other aspects of this era that may have appeared in Renaissance wedding dress include:

Throughout the years, brides continued to dress in a manner befitting their social status; always in the height of fashion, with the richest, boldest materials money could buy.

Prior to the reign of Queen Victoria (1837-1901), it was not common for women to wear a white wedding dress. Although there were a few exceptions, such as Mary Queen of Scots (who wore a white dress to her wedding in 1558), women typically wore other colors, which could have included blue, red, yellow, green, or even grey.

In 1840, Queen Victoria married Prince Albert of Saxe wearing a white wedding gown. In those days, white was not a symbol of purity, blue was. In fact, many women chose the color blue for their wedding dresses for specifically that reason. White, on the other hand, symbolized wealth. Because her dress was made with handmade lace, Victoria chose white because it was perfect color to highlight her extraordinary gown. Since white wasn't generally chosen as the color in which to be married, Victoria's dress came as quite the surprise. 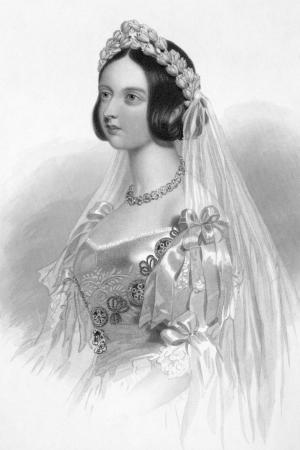 It wasn't an unpleasant surprise, however, because soon after women of elevated social status all over Europe and America began wearing white wedding dresses as well. Even though there were occasional examples of other women wearing white before her, Queen Victoria is credited with beginning the popularity of the white wedding dress. Some women still chose to get married in other colors, but the trend toward white was established after Queen Victoria's wedding.

Evolution of the White Wedding Dress

Once the trend towards white was established, it continued to grow. Although styles changed through the years, a white dress became the norm for wedding dresses in the West.

By the turn of the century, the Industrial Revolution made it possible for more brides to buy a new dress for their wedding day and white was the color of choice. The emergence of railroad travel influenced wedding dress styles, with some having narrower skirts. These dresses followed the trends and style of their day and continue to do so a century later. The most prevalent wedding dress color in Europe and America is still white.

In the early 1900s, dress styles with a narrow waist (used with a corset) and puffed sleeves were popular. Details like frills, high collars, and long trains were also seen in this timeframe.

During the 1910s, brides began wearing looser dress styles. Dancing at weddings became popular during this time period, and corsets became less common. Dresses were not as lavish, though they often featured the lace, ruffles, and high collars of the Edwardian Era. 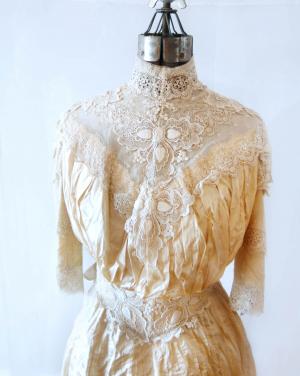 Sophisticated flappers dresses with elements like dropped waists or fringe, shorter hemlines showing the ankles, and a narrowing of the skirt style were common during the 1920s. These details translated to 1920s wedding dresses, many of which also featured tucks and deep hems.

It was a different story during the depression, when women were married in their Sunday best. During World War II, many brides felt it was inappropriate to get married in a lavish white dress, and chose church dresses or a good suit for their wedding attire. Wedding dress styles of the 1930s were more form-fitting and simple, often made from rayon 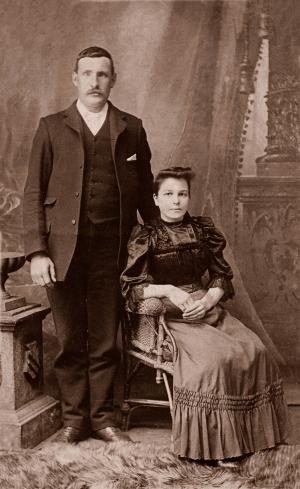 Coming out of the Depression Era, dresses still had practical elements that reflected wartime necessity. 1940s dresses were sometimes made of furnishing fabrics to save money. 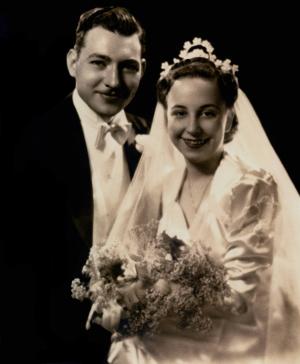 After the war, a prosperous era dawned and wedding dresses reflected this. Formal white wedding gowns became the fashion. Shades of white, such as cream, off-white or ivory are all acceptable wedding dress colors, while bright colors such as blue, green or pink have lost favor. It was considered bad luck to get married in a black dress. 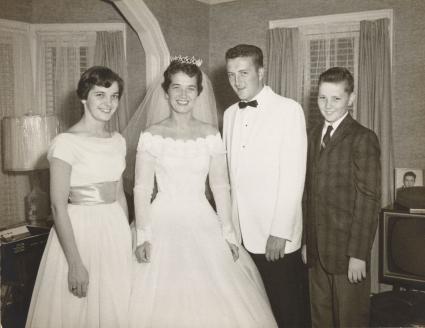 Slimmer dress styles that were more column-like, as well as rising hemlines, were hallmarks of this decade, and were seen in wedding dress styles. Dresses sometimes incorporated metallic elements. By the end of the decade, empire waists were becoming more popular and these began being featured on wedding dresses. 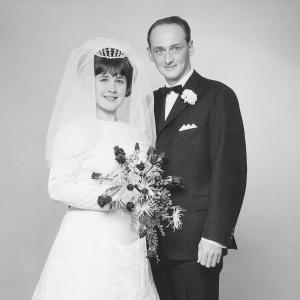 A bohemian look was a big part of the wedding dress evolution in the 1970s. Common details included square necklines, loose or batwing sleeves, and ruffles skirt hems. Lace or chiffon maxi dresses were often worn. 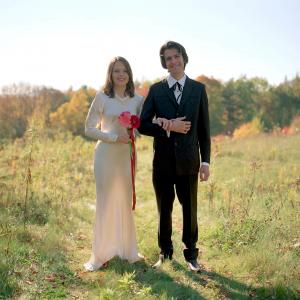 The excess of the 1980s found its way into wedding dresses, with princess style gowns featuring large puffed sleeves. Lace and tulle layers were popular, and dresses were often made of taffeta. 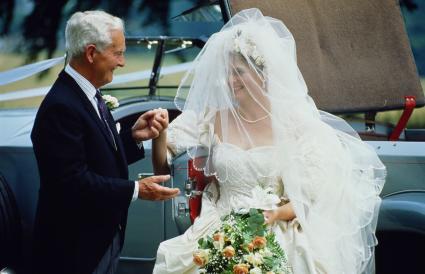 While bridal attire varied in the 1990s, most dresses leaned towards sleek, streamlined styles that were contrasted the 80s look. Form-fitted dresses were popular. 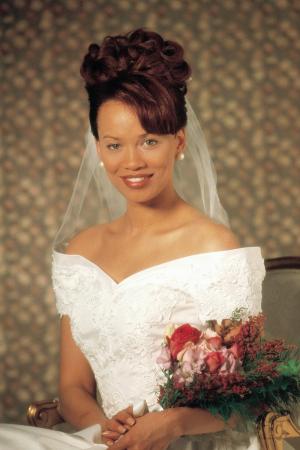 In the 2000s, many dress options were seen, but the A-line style gown was a popular look. Strapless gowns also increased in popularity. 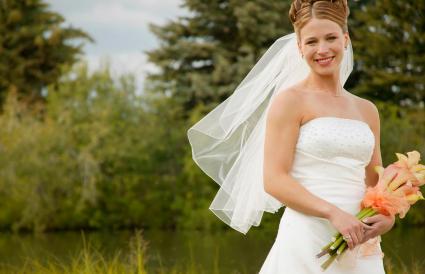 Over time, it's interesting to note the different influences on historical wedding dresses. Culture, social class, and prevalent norms all played a large part in the type of wedding dresses women have worn. In addition, royalty, aristocrats, the wealthy, celebrity style, and personal wealth or budget limitations have also influenced how women have been dressed on the day of their nuptials. Today, women are more empowered than ever before, with options for dresses that include multiple cultural or time influences, those that are inspired-by but cost less than high-end designers, authentic vintage dresses, or even informal styles that take into account the modern acceptance of relaxed weddings.

While today's tradition is often the white dress, not all brides feel bound to follow the trend. Today's bride can get married in almost any style. From an ornate designer dress to a more informal beach wedding dress, it's a given she'll look beautiful in whatever style she chooses.