Throughout Western history, marriage has existed as an important social contract and cultural event. However, weddings and the institution of marriage have changed dramatically since ancient times. In fact, the earliest weddings barely resemble those celebrated by today's brides and grooms.

Western marriage traditions date back to Ancient Greece and Rome, where marriage was much more of a legal contract than a romantic endeavor. Instead of taking place between a man and woman, the marriage was actually a contract between two men: the groom and the bride's father. Women had no choice about whether they would marry or who would become their husband, and they may not even have laid eyes on the groom before the wedding day.

Typically, Ancient Roman and Greek grooms were in their late twenties or early thirties at the time of marriage, but brides were much younger, usually only teenagers. In marriage, the woman's primary responsibilities included bearing children and caring for the home.

A wedding ceremony in the classical period might have included these elements:

Prior to the Medieval period, marriage was more of an informal agreement, and there was rarely any contract or document that legalized the ceremony. 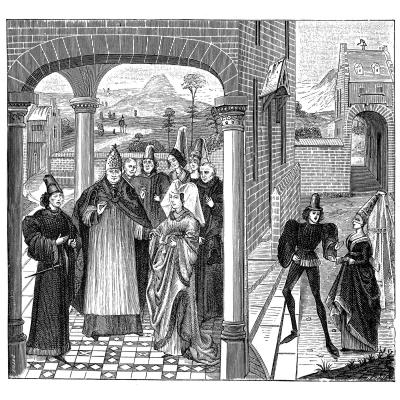 However, according to History Undressed, that began to change around 1076 CE when laws began to affect how a marriage was performed. These laws meant that women were no longer allowed to be bartered, sold, or exchanged for goods of any kind. If a couple wanted to get married, a priestly blessing was required first. It was also illegal for secret wedding ceremonies to be held.

A wedding was still arranged in many cases, and contracts were even drawn up listing the terms and rights of all parties involved. Weddings among royalty and aristocracy were often arranged when the bride and groom were only ten or twelve years old. These weddings were more about property and inheritance than love.

During the Medieval period, a typical wedding may have included the following:

Elizabethan Weddings Are the Start of Modern Traditions

During the Elizabethan era, which occurred between 1558 and 1603, most marriages were still arranged. According to Elizabethan-Era.org, women had very little say in who or when they married. Women could legally consent to marriage at the age of 12, and men could marry at 14. Many couples did not meet before the wedding day, but some well-to-do grooms may have been presented with a picture of his betrothed beforehand so he would know what she looked like.

Prior to the wedding, the groom accepted the bride's dowry. In many cases, this was the reason behind the wedding. A dowry wasn't necessarily money; it was also land or goods. While technically paying a "bride price" was illegal, a dowry was more or less considered a wedding gift. The families were able to get around the bride price law on this technicality.

A number of modern wedding customs have their roots in Elizabethan weddings, which often included the following:

Women Were in Demand During the Colonial Era

According to Genealogy Magazine, marriage in American colonial times, from about 1620 to the late 1700s, had some unique characteristics. Because most of the colonial settlers were male, white women of marriageable age were in great demand. Sometimes, women were even shipped to the colonies and sold to the highest bidder.

More Business Than Love in Marriage

Although the specifics of the marriage customs and ceremony varied depending on the person's culture, marriages were still more business arrangements than loving relationships. Courtships and marriages were arranged, usually by the father of the young men, who would write a letter to the young lady's father requesting permission to court. These letters would usually list the attributes of the young man in question and why the union would be a profitable one for all concerned. If the father of the young lady agreed, courtship and, after a negotiation of dowry, marriage would eventually take place.

Weddings varied quite a bit in the South and North and among German, Dutch, and English immigrants; however, a colonial wedding may have included the following:

In Victorian times, which constituted most of the 1800s, a woman would "come out" into society as soon as she finished school (around the age of 17 or 18). This was a very important and exciting time, as she had been groomed for marriage all of her life. New clothes and accessories would be purchased so she would look her best and impress any potential suitors. Men, of course, viewed courtship as more business than pleasure.

After Queen Victoria wore a white dress to her wedding, brides in England and America began to take up this trend. 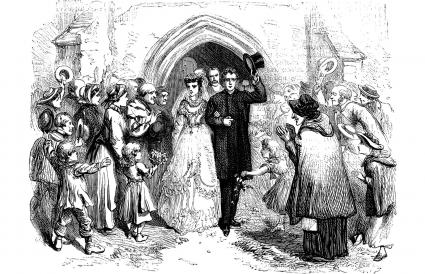 According to Manners, Culture, and Dress of the Best American Society, a book published in 1893, a typical Victorian wedding might include the following elements:

Although today's couples can choose whom they will marry and have unlimited options when it comes to their ceremony, attire, and customs, modern weddings still have their roots in Western weddings of the past. If you throw rice, exchange rings, get carried over the threshold, or wear a veil, you are living those traditions in today's modern world.