The use of wedding flowers has an ancient history. Understanding the role flowers played for this festive celebration may inspire you to incorporate a few in your wedding.

There is some cultural evidence of floral use in weddings during the earliest recorded historical period in Egypt, Greece and Rome. An ancient Egyptian, Greek or Roman wedding was a rite of passage to ensure the continuance of a dynasty, cement a trade alliance, or create more hands to work the family enterprise.

Garlands and crowns used in Greek weddings included olive branches, herbs to honor the goddess Hera, of marriage and fertility, and scented white flowers such as orange blossoms. Strands of ivy symbolized the unbreakable bond of the marriage; the white blossoms stood for sweetness and happiness. 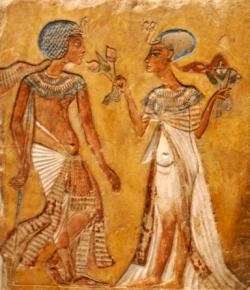 Ancient Egyptians, clustered in the fertile lands along the Nile, collected flowers in their travels and venerated the local lotus. The symbolic lotus appears widely in Egyptian art and may have been a wedding decoration. A papyrus poem dating from about 1100 BCE references love and lotus flowers. Marriages were simple, civil agreements then, and archaeological discoveries show only that Egyptian brides carried thyme and garlic as a shield against evil spirits.

In the Middle Ages, fragrant herbs and abundant grains like garlic and sheaves of wheat were symbolic wedding flora, along with flower garlands worn by both bride and groom.

During the Middle Ages and Elizabethan times, regular bathing and laundry were indulgences reserved for the privileged, difficult for many commoners, near-impossible -- and so infrequent -- for peasants (who might own a single set of clothes). Flowers and scented herbs could serve as more than decor for fragrant brides and grooms. A clutch of garlic stems, or roses and fresh rosemary, could mask any personal pungency with evocative scents from the garden and the kitchen.

Flowers in Her Hair

A medieval bride might wear her hair unbound, woven with scattered flowers or wound with a garland, and attach an herb and potpourri sachet to her gown.

In the Elizabethan/Tudor era, wedding flowers were playful and more abundant. Posies, nosegays and sachets were added to or substituted for medieval wedding flora. The kissing knot was introduced.

Decorative posies were kind to delicate noses -- and helped to propel those new alliances into intimacy and abundant progeny. An Elizabethan bride might wear a fragrant garland and her guests would receive small, scented bouquets as gifts. 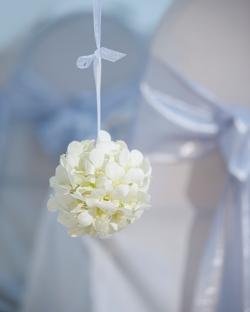 A quaint custom from the Tudor period -- 1485 to 1603, within the Elizabethan Age -- was a feature of wedding receptions called the "kissing knot." This is a round ball of blossoms, sometimes studded with greenery, suspended over the bride-and-groom's section of the head table. Kissing knots hold the same mystique and custom as sprigs of mistletoe and holiday kissing balls tacked to lintels over doorways - the lucky couple who comes together under them is entitled to a kiss. In the case of the wedding knot, the flowers are a reminder of romance and the promise of a long and faithful marriage.

The Victorian Era spanned the rein of Britain's popular monarch, from 1837 to 1901. Symbolic flowers, posy bouquets, and blossom crowns for brides were trendy. 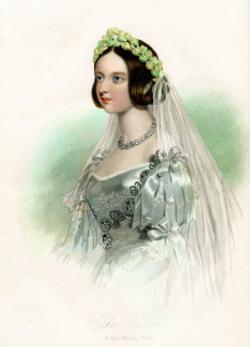 People were much taken with the language of flowers in Queen Victoria's day. Lavish tomes featured illustrations of every kind of blossom and the various meanings attached to it. Victoria paid scrupulous attention to detail and sumptuous staging, especially flower symbolism. She heaped her ceremony with cut and blooming flowers, and wore a crown of orange blossoms -- a symbol of chastity -- in her hair, sparking a craze for bridal flower crowns.

Queen Victoria was a fan of the tussie mussie -- the old English name for a small posy or nosegay style bouquet. Tussie mussies were popular in Victorian England.

The Queen's bouquet was a mass of scented symbols. One flower she carried was myrtle, a fragrant plant evoking the love goddesses, Aphrodite and Venus. The delicate, creamy-white blossoms are associated with beauty, fidelity, passion, and immortal, true love.

The compact Biedermeier bouquet, first seen in Switzerland and Germany in the late 1800s, is a formal design of concentric circles of flowers with a short wrapped stem, very symmetrical, very geometric and modern, which may account for its appearance at weddings today.

By the twentieth century, flowers were de rigueur for weddings, even modest ceremonies called for a bride's bouquet. Changing fortunes and fashions sent bouquet styles in and out of favor. A full-on traditional wedding meant flowers, blooming bowers, and potted trees for the service and reception, bouquets for the female bridal party and boutonnieres for the males.

Bridal and bridesmaid bouquets common in the early part of the twentieth century included:

Late Twentieth Century and Beyond

Translate History for Your Wedding

Let your personal (bridal party) flowers dictate the direction of floral decor for the church, service, or reception. Position centerpieces with wedding photos in mind, create ambiance around floral arrangements with lighting and other decor, and get a bouquet that's comfortable to carry and toss. Copy the best ideas from history, but translate tradition into your own signature style.