A Celtic wedding ceremony may incorporate ancient traditions of betrothal and marriage practiced by the Celts all over Europe. These traditions may have been initially dictated by local customs and usage, but with time Celtic wedding traditions have come to represent a deeper connection with nature and ancestral wisdom. Include as many or as few traditions as you wish.

The Celts were once spread far and wide throughout most of Europe, from the British Isles to Spain, and from Portugal to Turkey, therefore you will find it is almost impossible to pinpoint one specific type of Celtic wedding ceremony. However, studious of ancient Druid tradition and talented authors, such as Emma Restall Orr, have devoted themselves to preserving ancestral Celtic traditions and have incorporated them into marriage rites that honor Celtic heritage both in spirit and action.

A Celtic wedding ceremony might be composed of any or all of the following elements:

Before temples and houses of worship existed, the Celts designated spaces of nature as sacred places to hold their marriage ceremonies. To do this, a circle is drawn with flowers and greenery. A candle is placed in each of the four cardinal points. The north, which is the head of the circle may include a more elaborate setting to include a candle for the sun, a candle for the moon, a candle for the couple, a bowl of water and a bowl of salt. The circle is consecrated by the officiating bard by saluting the four elements, lighting the cardinal candles, and blessing the circle. Elements such a water, salt, and incense may be used to consecrate the circle.

Presentation of the Couple

As modern weddings include some sort of processional to the altar, couples in Celtic wedding ceremonies approach the circle. Henceforth, the couple is presented before the circle, either in the company of their parents, their beloved friends and family, or even by walking to the circle by themselves. This can be done as individuals that meet before the circle or by simply walking together towards the circle.

The officiating bard welcomes the couple into the circle and states the purpose of the ceremony. Along with a welcoming statement, blessings, prayers may be offered, ancestors may be honored, and readings or songs may be included.

Declarations of Intent and Vows

The officiant proceeds to ask the couple their intention with regard to entering into the union and also guides the couple in the declaration of their vows. This may be done through questions, or inviting the couple to profess their vows to each other. 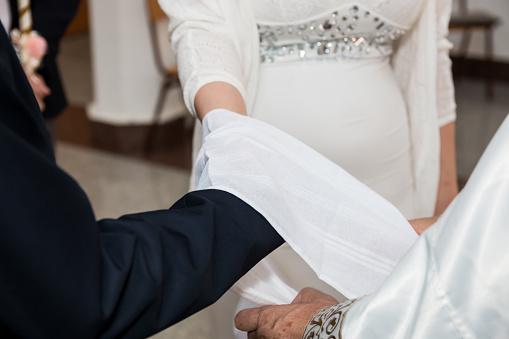 Binding (or 'Fasting') of Hands

In yonder days, couples would publicly bind their hands as means of betrothal. By doing so, they would be officially engaged and would marry after a certain period of time. Today, couples link hands, forming a circle of infinity and lasting love. Their hands are typically wrapped with a cloth or rope, tying them together in the tradition of Celtic wedding handfasting.

If the couple wishes so, they may light a candle representing their union. This tradition can be done by simply lighting a candle and vowing to cherish one another as that which they hold most sacred. Or it can be done in the spirit with which a Unity Candle is celebrated, two lives becoming one.

Exchanging gifts has always been a way of professing love and giving standing value to promises and commitments. A Celtic wedding ceremony may include an exchange of rings as most modern wedding ceremonies do. If the couple chose to include handfasting in their ceremony, they may untie their hands after they exchanged the rings.

Oath Over the Wedding Stone

Ancient Celtic wedding traditions included making an oath over a holy stone, representing the permanence of their vows, and even the foundation upon which the marriage would be built just like a house would start with one rock. Modern couples can have their officiant bless a stone or rock of their choice and they can make an oath to honor their vows by holding unto the stone. The stone will be a physical reminder of the emotional and spiritual vows made on their wedding day.

Before concluding the ceremony, Celts would offer mead and bread to their ancestors and share some with each other. It is not only a way of saying thank you to the earth for its fruit and nourishment, but also to the ancestors without whom there would be no couple. This can be done with sweet wine and the cake. The couple pours wine on the earth and crumbles a little cake on the side. It can be done once for the ancestors, a second time for those loved ones who couldn't attend the wedding, and a third time for the couple to enjoy their first drink and meal together as part of the ceremony.

Blessing and Opening of the Circle

The couple's union is blessed by the officiant, the matrimony is declared, and the circle is opened by loosening up or scattering the flowers and greens as a symbol of expanding the holiness of that space to all the other areas of the couple's life.

There are many traditions that can be used in a Celtic wedding.

Celtic Tradition Is Rich and Varied

Ancient Celtic people were spread all over Europe, their rich traditions, culture, and deep connection with nature persist to this date. Call upon this magnificent culture to personalize your wedding ceremony with as many elements as you consider appropriate and bring some Celtic magic to your big day.