You can find wedding traditions for a bridal couple with an African heritage to personalize their wedding ceremony and reception. Including these customs will make their wedding extra special while paying homage to their heritage.

The Beauty of African Wedding Traditions

African Americans know the rich history that comes from the land of their ancestors and how diverse African culture really is. Those from South Africa will celebrate a completely different heritage than those from the East, and yet they all somehow come together to form one united and beautiful collection of ceremonies and traditions.

Africa is big on music, dance and color - in other words, they really know how to throw a party. Infusing some of the age-old nuptial traditions from this ancient land can really add a special twist to your big day.

African wedding attire, especially for the bride, is far from the typical white ball gown found in many American weddings. Instead, a traditional African bride wears a woven cloth that represents her roots and the history of her native land. For example, the Kente fabric is a tri-color weave of gold, red and green. The green represents the natural plant life found in Africa, red stands for the blood of those who were sacrificed to protect others in times of war, and gold is for prosperity among the people. You may also at times see a square sort of zig zag that looks almost like a pattern of stairs - this symbolizes the overcoming of obstacles during an African's life.

Out of these vibrant prints, an African bride wears a wrap skirt, blouse, and a shawl. She may also wear a special headpiece created for the wedding day.

The groom will wear a shirt and pants, a long jacket, and a hat called a "fila," which is rounded and designed similarly to a box.

One of the most popular rituals found in African wedding traditions is "broom jumping." Just as the name suggests, it involves jumping over a broom to symbolize the couple's new union. While this is considered to be an African wedding tradition, it actually originates in America's southern states, where it was originally a slave tradition. While their marriages were not recognized legally, many slaves and servants got married and included a broom jump into their ceremony. Today, many African Americans include it as part of their reception festivities. 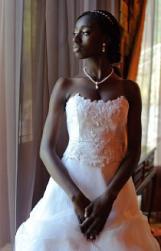 Incorporate traditions into your wedding.

In some cultures, such as Morocco, the wedding traditions are a bit more unconventional and far from Western ways. As part of the ceremony, the bride is carried through the crowd of wedding guests into her bridal chamber, where she is prepared for her wedding night. One tradition following the wedding is the verification of the bride's virginity by her wedding attendants (aka bridesmaids), and then this same group of women witnesses the loss of this virginity to her husband. This is a far cry from what most American couples expect on their wedding day/night, but those of Moroccan descent still practice this somewhat invasive tradition.

Not usually found in America but still practiced in Africa along the Nile is the gathering of livestock. Instead of sending out formal wedding invitations, the groom knocks on the doors of relatives' houses and asks for donations to a bridal herd he must form to pay as a dowry to the father of the bride. The livestock gathering is such a big deal in this part of the world that the whole collection process is often re-enacted before the wedding guests.

Men and women of the Nile region also practice nudity, and so "dressing up" mean wearing ash, feathers and jewelry to the ceremony.

A Far Off World

African wedding traditions are so different from those found in America and Europe that their existence is something of an alluring mystery. If you are of African descent, talk to family members to discover the traditions unique to your own culture. If you are not from Africa, still consider using one of the many unique and beautiful traditions found throughout this far off land.