The wedding reception introduction of newlyweds, their bridal party, and important family members is a tradition that is still observed in most weddings and it's actually quite functional. It is a formal way of introducing the bride and groom as a married couple along with what they are going to be called from now on.

Whether traditional, modern, or creative, the best introduction is the one that caters to the couple. Ask and confirm how they want to be addressed when introduced, then, follow through. If you're the couple who is looking for the right intro, know that you can request a specific one. Last names may be taken, compounded, merged, or kept, and people work hard to earn their titles and degrees. So do your best to get all the details right: from last names to proper pronunciation to titles to format in which they want to be introduced. It will mean a lot to the couple.

Traditional Intros for Bride and Groom

Timeless and functional, traditional introductions are widely used for happy brides and grooms. They infer the bride is changing her name and are basically worded the good old-fashioned way. It's tradition!

In a time of marriage equality and egalitarian marriages, all kinds of couples are favoring introductions that place both partners in equal standing. These introductions are neutral and respectful of each individual's preference regarding last names and gender roles. 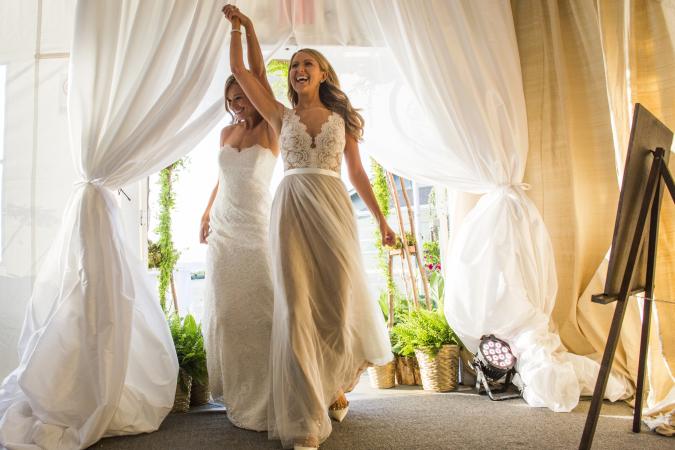 If union and marriage were the same, the fight for equal marriage would not have existed. After all that struggle why shy away from being introduced as wife and wife or husband and husband? Couples all over are enjoying traditional introductions knowing full well it is a right hard earned.

A creative introduction truly reflects the couple. Have fun creating something special that matches their interests and likes.

Usually, all members to be introduced wait outside the reception until presented by the emcee. As they are introduced, the bridal party enters the reception and take their seats. Once the parents and bridal party have taken their places, it is time for the newly wedded couple to enter the reception. The emcee then calls attention to the arrival of the couple, announces their names, and invites guests to offer congratulatory clapping. 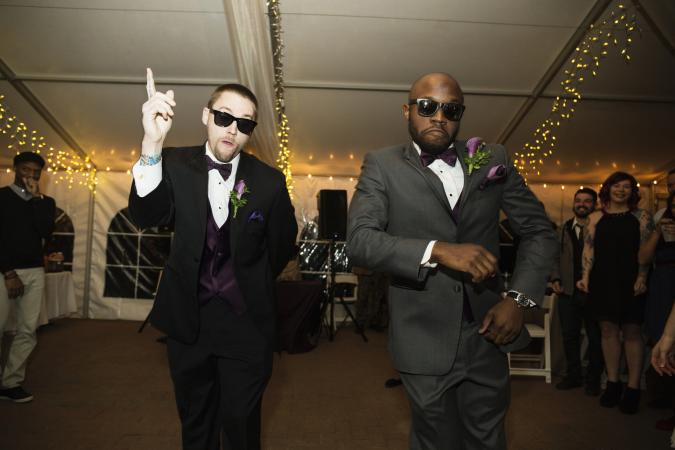 Dancing numbers and all kind of fun variations are now taking the place of the formal "walk over to your place" introduction. However, the basics remain: those who are taking their place do (usually parents) and those who are staging something fun take their spot in the limelight to the rhythm of the perfect tune.

Parents and Wedding Party Are Optional

Not all introductions include parents, and some don't even include a wedding party! This has much more to do with local customs, usage, and the actual shape and form of the wedding in question and much less to do with the "right" way to do this. This tradition can be modified to suit the couple's preferences.

More People Can Be Added

Grandparents, ushers, flower girls, children, and whoever is close and dear to the couple's heart can be added. They can line up and make an entrance or you can just give them a shout out to their tables. This last option is particularly useful when grandparents, or even parents, are on the elderly side.

The Only Must Are the Newlyweds

When it comes to introducing the couple, you'll need to keep etiquette in mind to avoid a faux pas. 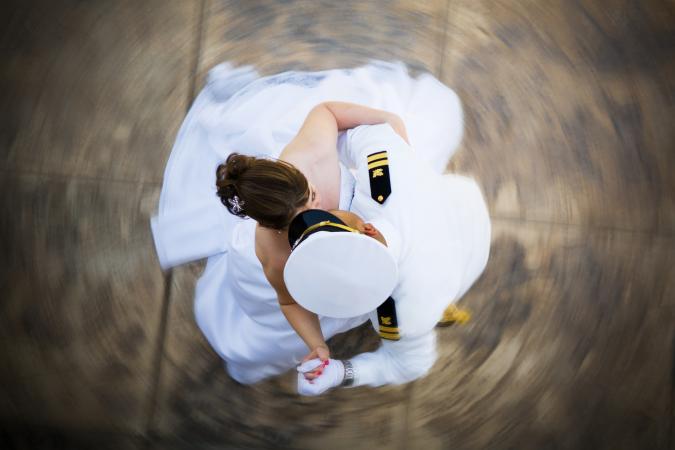 When introducing a new couple at a wedding reception, it is imperative that the DJ or emcee understands their titles and how they wish to be introduced. If one spouse or the other has a formal title, such as a doctoral degree, military rank, judge's position or ministry position, it is important to use it in the introduction. Additionally the higher ranked individual precedes the other. Examples include:

Many women choose to retain their former last name or hyphenate their new last names instead of taking their husband's name. Introduce the wife using her proper last name, such as Ms. Lila Lawson-Lewis and Mr. Leighton Lewis. Traditionally, the husband is introduced first; however, in these cases many people choose to "embrace" the wife's name by placing the husband's name in second place in an attempt to mirror the traditional intro which would be Mr. and Mrs. Leighton and Lila Lewis (see how Lila is "embraced" by his name and surname). Versions of both takes would be:

Additionally, you may encounter situations where couples have decided to combine their last names, whether by creating a new one with both their surnames or hyphenating. For example: Jo and Jamie Johnson-Jones or Andrea and Amelia Arleigh (Aristos/Leigh). In these cases, it is recommended to use alphabetical order of first names and then the combined last name, but of course, the couple always has the last word. Sometimes, it just sounds better the other way!

If the couple's parent situation is outside of the traditional, there might be a few situations to deal with. Parents may be widowed, divorced, remarried, or dating. There might even be adoptive parents and biological parents, all divorced and remarried! So how do you go about introducing them at the wedding reception? The short answer is straightforward and with tact.

Single, divorced, and widowed parents may be escorted by other members of the bridal party or even close family and friends. Divorced parents may not be on friendly terms. Stepparents may not always be welcomed. Do not assume and do not force situations. But also, don't overthink it. Keep the introduction simple, to the point, and always double check with the couple. Always take the feelings of everyone into account and when in doubt, ask again.

Parents who have passed away are not introduced. The very logistics of this being an introduction of people attending the wedding dictates it this way. However, a commemorative mention may be made at some point during the reception. Most appropriate is to include a note in the wedding program in memoriam of the deceased parent, perhaps a special element as part of the ceremony, maybe even an honorary place in the reception, a couple of words during grace, and even offer a toast in his/her memory. There are many ways to honor those who have passed in a wedding, but the introduction of the couple at the reception is not necessarily the best place.

Keep It Short and Sweet

When introducing a couple at their wedding reception, whether they come on their own or with an entourage, consider that this is just the beginning of the reception. They already had an emotional ceremony, maybe a couple of drinks during cocktail hour, and now they are getting ready to enjoy a little dinner and party the night away (with a host of other activities in between). If people are attending the wedding, they are already familiar with who is who, at least from the invites and the program. So keep the introductions fun, tactful, and to the point, unless the couple directs you otherwise. With that in mind, have fun and enjoy the privilege!

6
Comments
© 2006-2020 LoveToKnow, Corp., except where otherwise noted. All Rights Reserved.
How Do You Introduce a Couple at a Wedding Reception?