Some modern brides prefer different wedding reception dresses. This two-dress trend allows the bride to change into a less formal gown to enjoy the reception party unencumbered by a traditional wedding dress.

Although worn during the same wedding, a ceremony and reception dress usually have different attributes.

The overarching difference between the two types of gowns is their formality. A ceremony dress is often more formal so as to reflect the solemnity of the ceremony and church in which the ceremony occurs, while a reception dress is typically less structured and less formal to accommodate the party aspect of the wedding.

According to Glamour Weddings, there is no need for one of the two dresses to cost more or less than the other; instead, the two dresses can be relatively the same in terms of expense. However, the publication does state that, because the time spent in the reception dress is longer, you may consider spending slightly more on that dress. 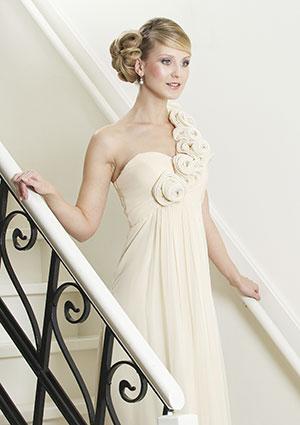 A bride wears a wedding reception dress for two main reasons: when she desires a second dress or because of her culture's custom.

Some brides make the personal choice to change dresses between the ceremony and reception. Reasons for this choice may be:

Regardless of reason, these brides change out of their ceremony dress and into their reception dress during the time between the two events. Depending on the change, this may require alterations to her hair, makeup, and accessories.

Some cultures have customs dictating that a bride should wear more than one outfit on her wedding day. Examples of these cultures include:

In multi-cultural weddings, it is not uncommon for a bride to change her gown between the ceremony and reception. One outfit will likely be the traditional outfit for her cultural background, such as an Indian wedding sari, but the other may be a contemporary Western long white gown. When to wear each item is up to the bride. For example, in an Indian-American wedding, some brides choose to wear the sari during the ceremony to reflect any traditional Indian elements included in it, while others prefer to wear the it during the reception so that they can move more freely while dancing.

Where to Find a Reception Dress

Although most bridal stores sell less formal gowns that are suitable for a reception dress, some larger department stores also sell gowns that are appropriate for a bride to wear during her wedding reception.

Simply Dresses offers several wedding reception-specific dresses that stand out for their lack of formality and low cost. Many of these dresses are short, contain some color embellishment, and cost less than $500. For example, the Strapless Short Sequin Dress is knee-length and allows for easy movement due to the flowing skirt. This dress costs $69.

Additionally, the company offers prom gowns that are suitable to wear as wedding reception dresses. The Pleated Pastel Strapless Formal Dress contains a sheer floor length skirt over a short dress and sells for $99. The dress' lack of formality and the fact that it exposes more of the bride's body than a traditional floor-length wedding gown make it perfect for a wedding reception.

David's Bridal identifies several of its wedding dresses as reception dresses. The store and its dresses stand out because of the option for alterations and the fact that it offers affordable gowns by high-end designers, such as Vera Wang. Gowns cost around $1,000 and are floor-length. Despite being floor-length gowns, they are fairly simple, with little or no beading. They are not overly structured.

Whether personal choice or cultural custom, purchasing and changing into a reception wedding dress allows you to showcase your background, personality, and style. You'll have the freedom to feel comfortable enough to dance the night away.