A traditional Irish wedding couple may want an authentic wedding cake of fruitcake soaked in Irish whiskey! While you observe Irish nuptial traditions, you can still personalize your cake with a few modern touches.

There are a few substantial differences between common American wedding cakes and their Irish counterparts. Just as in America, Irish brides and grooms cut the first piece of their cake together, but there are quirkier customs as well. One says that if the bride's new mother-in-law takes a piece of wedding cake and breaks it over the bride's head after the wedding ceremony, she and the bride will get along well for life. 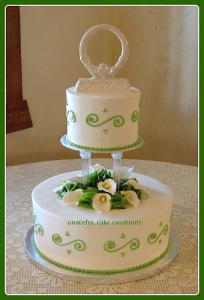 The traditional Irish wedding dessert is a far cry from many super-sweet American cakes with light textures, bright flavors, and lots of sugar and butter. A conventional Irish wedding cake is a triple-tier fruitcake, often soaked in whiskey. It might contain raisins, currants, candied cherries, almonds, citrus peel, molasses, rum, and heady spices such as nutmeg and ginger. Engaged couples with Irish ancestry sometimes make just the top tier of their wedding dessert the traditional fruitcake and reserve it for their first anniversary or the birth of their first child. If you're hesitant about serving up a fruitcake for fear of how guests will react, consider making it a groom's cake or serving it alongside other flavors. Since a real Irish fruitcake will need to sit for at least several weeks before being served, plan according with the baker or decorator you choose for your wedding.

Either buttercream or fondant frosting may be used on an Irish cake. The frosting can serve to disguise the heavy fruitcake underneath, which might prove to be a surprise to some American guests who aren't familiar with Irish wedding cake traditions. Often, the traditional three tier cake is coated with thick, sweet almond frosting, which serves as a "glue" for the fondant or a base layer for buttercream. 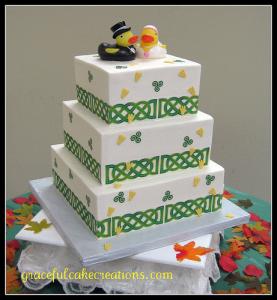 Green is a color that even people who know very little about Irish tradition can identify with the country. An all-green cake might be a bit much for some, but light green paired with white or ivory is an elegant color combination. Try it by adding fresh green leaves or green flowers to your cake, or have a decorator pipe on accents with a light green buttercream. More intricate designs can also be embossed onto a cake.

If you've visited Ireland or lived there, it's likely that there are some spectacular castles or landmarks that have always stood out in your mind or that mean a lot to your relationship. You might have to dole out a significant amount of cash to get a decorator to replicate them in frosting, but if the effect is well done, it may be worth it to have one of those special places on top of your cake. 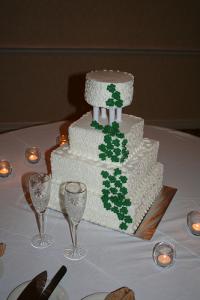 The Claddagh ring is a special Irish ring worn to symbolize love or commitment. If you're exchanging Claddagh rings at your ceremony or have one as an engagement ring, it might also be fun to feature the traditional symbol on your cake. When given a model, most experienced decorators will be able to make an oversized Claddagh ring from fondant or gum paste so that it can serve as an edible decoration. As an alternative, you can ask a decorator to pipe Claddagh ring-like shapes on top of and around the cake with thin buttercream frosting for a unique touch.

Shamrocks aren't only for St. Patrick's Day. They may be one of the more garish Irish symbols, but they can look classy on a cake if they're made with a pale green fondant and used sparingly. Putting shamrocks on a cake can also tie in with green wedding decorations or fresh flowers.

Regardless of where your Irish wedding cake inspiration comes from, it is sure to be meaningful, delicious and beautiful to behold.