There are at least 10 rude and inconsiderate things not to say to the bride, especially on her wedding day. If you have something wonderful to say to the bride then go ahead and shout it from the rooftops, but if you're tempted to say any of the following things, then zip it! 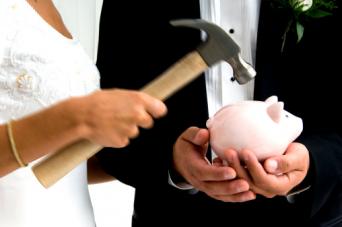 Like all things financial in life, some things are better left unspoken. Asking about the costs of the wedding and who footed the bill is not only totally rude, but also completely none of your business. And what bride wants to think about the mountain of debt that has been absorbed by her darling papa to craft the day of their dreams anyways? That's right - no bride ever. 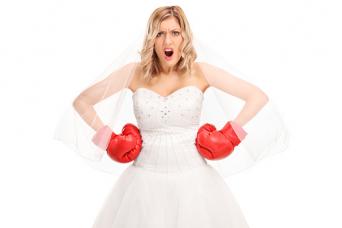 If you're going to give a compliment to a bride, make note that this is not the way to do so unless you are a total ignoramus. Pseudo compliments that sound vaguely like a put down are a one way ticket to wiping the smile from a bride's face. Tell them you love their dress, even if you think it's the meaning of the word monstrosity itself, or be known forever as a total jerk.

3. Are You Pregnant Yet?

Come on now, they've barely signed the marriage certificate, so guess what? Asking about the pitter patter of tiny feet is about as welcome as a fart in a phone booth. Let them have their moment and leave the details of offspring to the happy couple.

Unless you have the skin of a rhino and want to be automatically uninvited to every wedding in your social circle by bad mouthing wedlock, this phrase gets a raging double thumbs down. Keep your wedding hatred to yourself.

5. I Thought You'd Never Get Married!

So, you thought the bride would get left on the shelf like Aunt Mavis? Or maybe you always thought she was such a man-eater than no man would ever be able to last more than a week with her? Whatever your predictions were for her settling-down prospects, the bride doesn't want to know! And doesn't want to be reminded of her disastrous dating history either. Just keep quiet. 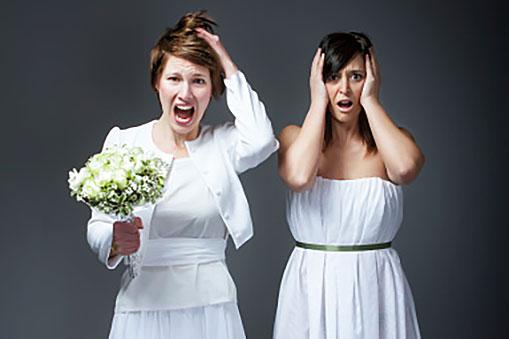 Never, ever start any sentence to the bride with those four words. Whatever you have seen or heard, bite your lip like your life depended on it. A bride on her wedding day is only ever three seconds away from freaking out at the mere hint that something may not be according to plan, so just don't go there.

The bride does not want to hear that she looks Sarah Jessica-Parker, Nicole Richie, Nicole Kidman, your cousin, or best friend on her wedding day. She wants to hear that she looks beautiful in her own individuality and that she reigns supreme over every other possible bride on the planet. So quit the comparisons, pronto.

It's no secret that a bride's first port of call for wedding inspiration these days is the holy picture-perfect wedding grail that is Pinterest, but she sure as heck doesn't want you inferring she swiped all her wedding day ideas from there, even if she did! You have to be a special kind of human being to let this one slip from your lips.

9. Are You Worried About Divorce? 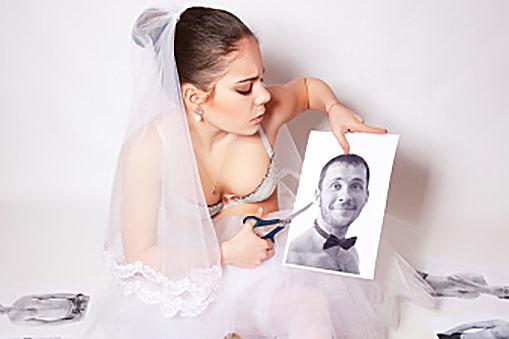 What the.....! Are you kidding?!!! The bride does not want to hear about that article you read in the newspaper the other weekend about divorce statistics, or shoot the breeze about the chances of her marriage ending up in divorce, or hear about your own divorce experience. On this day, of all days, the dirty D word is totally off limits unless you want to never be invited to another wedding EVER AGAIN in this life, or the next.

What the bride and groom are going to (or not going to!) get up to in the bedroom after hours is 100% off limits. Salubrious comments about what shapes they're going to be throwing in the bedroom are totally inappropriate, and whether they consummate their marriage or not is categorically none of your business. Move away now.

If you've ever uttered any of the above to a bride on her happy day, then shame on you. Speak these words and forever rue the day that you did.

Comments
© 2006-2021 LoveToKnow, Corp., except where otherwise noted. All Rights Reserved.
10 Things Not to Say to the Bride